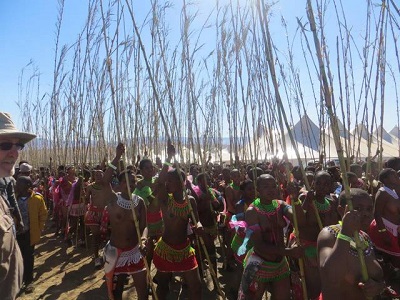 In August last year, I, together with a small group of friends was privileged to attend the annual Umkhosi woMhlanga (Reed Dance Festival) which is held at the Enyokeni Royal Palace near Nongoma, KwaZulu-Natal.  It is traditionally the occasion when the Zulu king chooses a new bride from the Zulu virgins who attend the ceremony. However, King Goodwill Zwelethini seems to have filled his quota and has not taken a new wife for many years now.

In days gone by, the girls would come only from Zululand but, in recent times groups from other parts of KwaZulu Natal and as far afield as Johannesburg, have also attended – including, this year a young English maiden. In the past all the girls who participated were required to undergo virginity testing. This has now become voluntary and those who have been tested proudly wear a coloured bangle as proof of this. Feminist groups have, predictably, raised howls of protest at this practice but the Zulus people themselves see this as part of their culture and simply ignore them. For the festival the girls wear traditional, colourful but very skimpy attire, adorned with some superb beadwork. 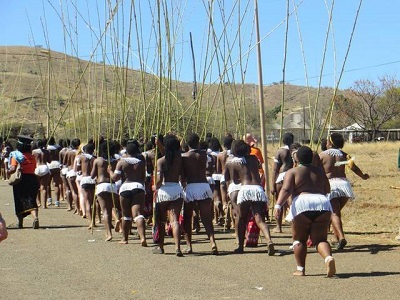 The festival starts on the Friday when all the paticipants go down to the river to select their reeds. More importantly, they are accompanied by older women, the chaperones, who instruct them in Zulu traditions and culture. On the Saturday each girl selects her reed, which can be about 3 metres long, at the marshalling point and, in their groups, march up to the King’s iSigodlo where the reeds are presented to him and where, group by group, they dance before him and his retinue. The procession is led by the chief Zulu princess. If any girl’s reed breaks before she reaches the king it is seen as a sign that she is not a virgin. During our visit we noticed several girls scampering back to the marshalling arena to fetch replacements!

Whilst we didn’t count them, we were told that more than 40 000 girls attended this year. If nothing else, this is a ringing endorsement of the morality of the younger generation of Zulu people.

It is a colourful vibrant festival, attended by perhaps 60 000 to 70 000 Zulu people and yet there were only a handful of pale skinned onlookers. Those of us that did attend were made to feel most welcome by a people proud of their cultural traditions and eager to showcase them to their visitors. If you would like to make the trip to this spectacular event, click on “Contact” on this website and I will be happy to help.